The Value of Equality

Is inequality bad? The question seems almost trivial. Few values appear as undisputed as equality. When we say that inequality is bad, or that equality is good, we often think of the fact that a society of equals is more solidaristic, tolerant, and democratic, among other things. Equality, it has been shown by epidemiologists, is even good for our health: the more equally income is distributed in a given society, the higher its average life expectancy. But while the instrumental value of equality is not much in doubt, whether or not equality has value beyond that is a topic of intense debate.

The study of the value of equality focuses, then, on whether equality has value that is non-instrumental. The past quarter century has witnessed a lively debate among moral philosophers precisely on that question. Among those who are to begin with sympathetic to curbing inequalities, three camps can be discerned. Egalitarians believe that equality is good in itself, independently from any instrumental value it might harbour. Egalitarianism’s chief rival is the view known as prioritarianism. The priority view asserts that equality is not as such good but that improvements to those who are worse off are. The wellbeing of these individuals, the view maintains, ought to receive priority. The other rival view, known as sufficientarianism, also agrees that equality as such lacks (non-instrumental) value. But in contrast to the two other views, it asserts that what matters is to ensure that individuals reach a certain threshold level of well-being.

The debate concerning the value of equality is enriched by a number of themes that cut across the three dominant views. Does value reside with individuals or is also impersonal? Is concern for value satiable, that is, exhausted at a certain point (as the sufficientarian view seems to presuppose) or not? What is the relevant time-frame for evaluating the goodness of outcomes: should we be concerned with individuals’ whole lives, or should we (also) be concerned with shorter time segments? For example, should we be bothered by simultaneous inequalities, even while they even out throughout individuals’ lives? Is it equality that is good, or rather inequality that is bad, and is there a difference between the two claims? Do prioritarianism and sufficientarianism themselves present viable alternatives to egalitarianism as accounts of value? Some have shown that prioritarianism does not in fact respect the separateness of persons. Others have questioned the arbitrariness of the sufficientarian threshold.

These and related questions will occupy us at the Centre during the 2015-2016 academic year.

My research focuses on the theory of the welfare state. I’m especially interested in how social institutions work and how their workings map on to theories of distributive justice.

My doctoral research looks at health care institutions in particular, arguing that universal health care is best justified in terms of the security against risk that health care insurance provides (together with the failure of private markets to deliver adequate access to such insurance). I think this view provides not only a more compelling rationale for universal access compared to rival egalitarian accounts, but also a better fit with the logic of existing health care systems throughout the developed world.

I continue to work on questions of health care justice, but my current research focuses on issues related to social insurance more broadly. I am particularly interested in the place of risk and security in a political conception of well-being, and how this relates to the rationale for universal, mandatory social insurance programs.

I hold two PhD's (quite pathetic, let’s admit); in physics (2003) and law (2015), both from the Hebrew University. Last year, I was a post-doc fellow at the Safra Center for Ethics at the Tel-Aviv University.

My primary research interests lie in legal and moral philosophy. In particular, I focus on legal and moral epistemology; the relationship between procedural and substantive justice; and the foundations of (moral and legal) normativity. In my doctoral dissertation, I explored the coexistence, in normative discourse, of “first-order” and “second-order” norms – roughly, norms about other norms. My general hypothesis was that this coexistence is responsible for the complex, somewhat paradoxical, nature of the normative domain.

As a post-doctoral fellow at the Centre for Moral and Political Philosophy at the Hebrew University, I plan to continue this research and investigate further the key model of pure procedural justice, namely, a fair lottery, and more generally, the role of chances in distributive justice and political morality.

Professor Temkin is Distinguished Professor and Philosophy Department Chair at Rutgers. He specialises in normative ethics, social and political philosophy and is the author of Rethinking the Good: Moral Ideals and the Nature of Practical Reasoning (OUP, 2012) and Inequality (OUP, 1993).

At CMPP he gave an advanced PhD crash course on:  The Value of Equality

I am a PhD candidate under the King’s College London - National University Singapore Joint Degree Programme. I hold two Master degrees, one in analytic philosophy from the University of Barcelona and one in philosophy from the University of Parma (Italy). As an undergraduate, I studied philosophy at the University of Parma and I was awarded with an Erasmus scholarship to study at the Radboud University in Nijmegen (Netherlands).
My research focuses on contemporary democratic theory. I am particularly interested in the value of democracy, justification for meritocratic practices and systemic approaches to democracy. My dissertation analyses the relation between democracy and meritocracy. In particular, by examining contemporary works of both Western and Eastern political philosophies, the study investigates the space of meritocratic measures and practices in a democratic system.
My interest in the value of equality originated from the correlation between equality and democratic theories. During my time at CMPP, I will investigate different ways in which a democratic system can express equality. By assessing the main works on political egalitarianism, the research will disentangle the intricate relation between the value of equality and democracy.

I am a PhD candidate in the philosophy department at the University of Wisconsin, Madison. In my dissertation, I defend telic egalitarianism—the view that it is, in itself, bad if there is distributive inequality. This view requires defense because it faces an objection: namely, that either inequality is bad only in virtue of some further, distinct normative consideration (and so is not in itself bad) or it is not (and so there is no reason to think that inequality is itself bad). I argue that this dilemma can be avoided by developing a familiar egalitarian thought: that there is a connection between inequality and unfairness. But avoiding the dilemma by exploiting this connection requires completing two further tasks, which I also take up in my dissertation: (a) developing an account of (distributive) unfairness and (b) explaining the nature of the connection between inequality and unfairness. I also hope to show that developing telic egalitarianism in this way gives egalitarians resources to respond to other objections to their view (e.g., objections concerning the scope of equality and the objection that the kind of equality that matters is a social relation, not a distributive fact).

I am a PhD candidate in Philosophy at The University of Chicago.

My research focuses on basic equality and the problem of the basis of equality:  What does it mean to say that all human beings are each other’s moral equals?  What moral and political prescriptions follow from such a claim?   And what, if anything, can justify this idea?  In my dissertation, I argue that the moral equality of human beings can be defended even if empirically there is no morally significant property that all human beings equally have.

My research focuses on disability and equality. My thesis explores different ways in which society may reduce the inequality between disabled and non-disabled individuals. The reduction in the incidence of disabilities can be proposed as a way to achieve equality between disabled and non-disabled individuals. I analyse what would be the effects for equality of reducing the number of individuals who are born with disabilities.

These are some of the questions regarding equality that I am interested in: personal/impersonal value of equality, how to measure inequality, equality and population change, equality and priority.

I am completing my PhD in philosophy at the Australian National University. My work combines moral theory with decision theory and formal epistemology. In particular, I focus on how  absolute moral concepts, like ‘permissibility’, apply to you when you are uncertain about the facts of your situation. The puzzle of applying absolute moral concepts in such cases is that uncertainty comes in degrees, but absolute moral concepts do not. You can be 90% confident that your chosen action is permissible, but this fact doesn't make your action 90% permissible; it will either be permissible or it won’t be. In my thesis, I show that particular tools in decision theory and formal epistemology give us acceptable ways of applying absolute moral concepts in cases of uncertainty. As it happens, I believe that these tools also help us to make progress in various debates about the value of equality and the dictates of egalitarianism. 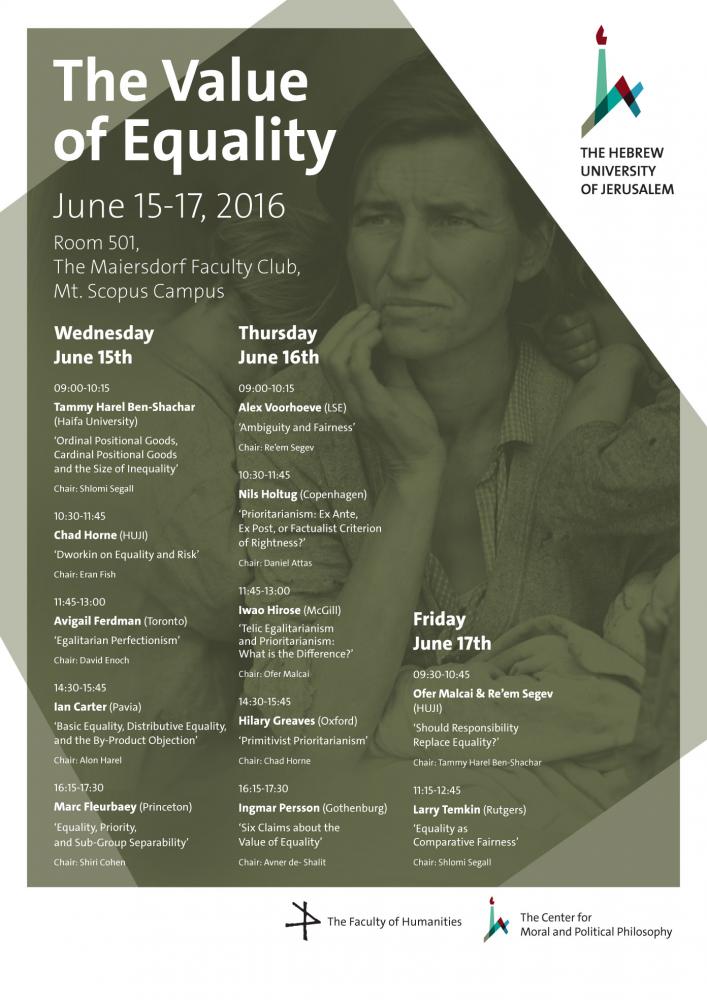