The study of wellbeing explores what it means for a person to fare badly or well, or more broadly, what makes a life good for the person living it. Some take wellbeing to be a mental state – the state of experiencing more pleasure than pain, for example. To others, wellbeing consists in having one’s desires satisfied, or perhaps in the satisfaction of those desires that are more fundamental, long-termed or better-informed. Still another view holds that what is good for a person is to simply have the kind of things that are objectively good, whether or not she desires them.
The concept is central to moral philosophy, and is discussed throughout the literature on political philosophy, the philosophy of economics, value theory and metaethics. The questions are rich in variety: is wellbeing something we ought to care about or promote? And if so, whose wellbeing should we care about, and which conception of wellbeing is to take priority? Is the promotion of wellbeing a valid object of public policy in a liberal state, or should governments provide autonomous individuals with merely the opportunity, or the essential capabilities for pursuing their own wellbeing? Is wellbeing to be maximized or distributed equally?
A related set of concerns pertains to welfare indices and the correlation between these and material prosperity. Empirical studies suggest a varying impact. GDP and the level of income are estimated to correlate strongly to life satisfaction, but rather weakly to happiness. These results and others raise some interesting questions for political philosophers. For example, given our understanding of wellbeing, is economic growth still a desirable goal? Are there other variables that may correlate better with wellbeing? And if so, are we to promote them instead?
Another philosophical controversy concerns the role wellbeing plays in practical reason. One of the challenges is to understand whether wellbeing provides us with reasons for action. It is widely believed that our relationships, careers and other worthwhile projects we choose to take upon ourselves are at least part of what makes our life go better. But is this our reason to engage in these relationships and activities? Or is it more correct to say, conversely, that our life goes better because we do the things we have independent reasons to do? When, if ever, does wellbeing have a role to play in decision making?
This short list of topics is by no means exhaustive. Further inquiries and suggestions would be a welcome contribution.

Approaching moral philosophy from a broadly consequentialist point of view, I have a long standing interest in population ethics, i.e. questions about how to morally evaluate states of the world by aggregating the well-being of individual people (and, possibly, other goods). This has led me to develop an interest in questions about the nature of well-being and the Good in general. My doctoral research focused on the value of achievements and I have recently begun to develop a novel form of an objective list theory about well-being which attempts to unify the items on such a list via the notion of harmony between mind and world.
Engaging in debates about substantive theories of the Good will make one acutely aware of what John Rawls has famously called 'the fact of reasonable pluralism' about such theories. I take this to be an important fact of moral life, and think that (besides political philosophy) all fields of applied ethics need to take it very seriously. I try to do so in my own work on business ethics.

Professor Sumner is University Professor Emeritus at the University of Toronto and Fellow of the Royal Society of Canada. His research interests are in ethics (theoretical and applied), political philosophy, and philosophy of law. He is author of Abortion and Moral Theory (1981), The Moral Foundation of Rights (1987), Welfare, Happiness, and Ethics (1996), The Hateful and the Obscene: Studies in the Limits of Free Expression (2004).

At CMPP he gave an advanced PhD crash course on: Wellbeing: recent themes

I am a PhD candidate in Philosophy at the Hebrew University of Jerusalem. I participate in the Honors  PhD program of the Mandel School for Advanced Studies in the Humanities, and the PhD program of  the Center for the Study of Rationality, both at the Hebrew University.
I work primarily in the areas of moral psychology (and motivation), moral uncertainty (and ignorance),  and deliberation (and rationality). My MA thesis was about “deciding correctly even when the  authoritative evaluative standard is unknown.” My dissertation focuses on moral uncertainty and on what has been called de dicto moral motivation: wanting to fulfill some thin moral ideal, such as doing what is right.
My interest in well-being is related to my interest in the activity of practical deliberation (in which we reason in order to make decisions regarding what to do): Is it constitutive for this activity to have some concern for well-being, happiness, or the good life in any sense?

I am an ABD doctoral student in the Philosophy Department at Syracuse University.

My primary interest within the topic of well-being is in determining the proper constraints on a theory of well-being. Some philosophers have suggested that it is a constraint on such a theory that it only postulate intrinsic welfare goods that, in some way, resonate with the individuals for whom they are purportedly good. In a recent paper, I attempt to show, contra at least two philosophers, that no interesting formulation of this constraint can be derived from the familiar principle that ought implies can. My dissertation, of which this paper is a chapter, is a collection of essays on puzzles of well-being. Other puzzles that have caught my attention include the following: (i) explicating and motivating the intuition that the shape of a life matters to its value for the person living it and (ii) determining which desires are such that satisfying them results in an increase in welfare.

My current research aims to address the nature and value of talent; why talents might (or should) be considered as valuable, and whether or not we have an obligation to develop them. Central to these issues is the relationship between talent and well-being. It is commonly thought that developing one’s talents contributes positively to overall well-being, either instrumentally or intrinsically, and that as a result we have prima facie moral reasons to cultivate our talents. However, there are cases which suggest that developing talents is neither beneficial for one’s well-being, one’s moral agency, nor for the flourishing of society.
During my time at the CMPP, I will be working on demonstrating that whilst morality and well-being can come apart, concerns about developing our talents are indexed primarily to well-being and take priority over any relevant moral obligations we might have. Consequently, an agent’s well-being provides her with reasons for action regarding the treatment and cultivation of her talents – these reasons are just as salient and significant as her moral reasons.

In my dissertation, I articulate and defend an approach to theorizing about prudential value which I call explanatory pluralism. The explanatory pluralist holds not just that the kinds of things which can be constituents of someone’s well-being are irreducibly multiple (a view I call enumerative pluralism), but also that the question as to what explains why something is a well-being constituent admits of fundamentally distinct answers in different cases. I argue that the best version of explanatory pluralism about prudential value will have two strands. The first can incorporate the core insight of desire-satisfaction theories, by recognizing the ability of a person’s pro-attitudes to confer prudential value on objects/states of affairs. The second can capture what is most attractive about objective list accounts, by recognizing that some of the things that are good for a person are so because they possess objective value. Such a theory promises to provide the best balance on offer between the various desiderata that govern theory choice in ethics. 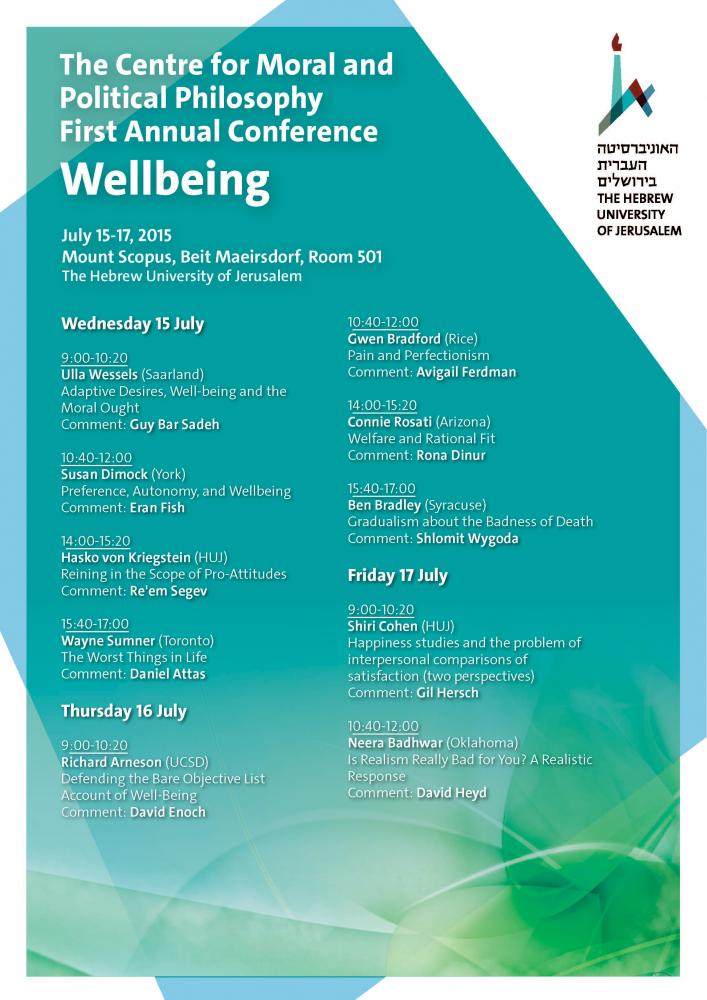